Ever since music has begun being distributed widely, there have been layers added on top to help guide listeners and label the intentions of the artist; things like titles, or spoken word. Album art undeniably has one of the most inseparable relationships between any two art mediums. While not every album cover has “meaning,” (and we certainly shouldn’t expect it to) it’s worth appreciating the ones that do. Much like the music itself, this is purely up to interpretation unless stated otherwise!

While there’s a nearly endless amount of albums and their accompanying art, let’s look at some of the more iconic covers to these significant hip-hop albums and the connections they might imply.

Kendrick Lamar – To Pimp A Butterfly 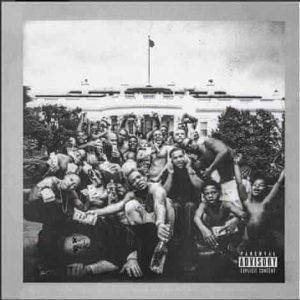 There’s a reason Kendrick Lamar is held in such high regard by both new and old hip-hop heads. His relentless commitment to technical yet evocative music has allowed him to reach every crowd, from the industry critics to the kids in Section 8 housing. To Pimp A Butterfly is another masterful project considered by many to be his best work. It encompasses themes such as blood money, systemic racism, toxic norms, and the human condition in relation to confusion and addiction.

The distinct cover features Kendrick surrounded by his brothers, as he holds a child. A white judge lays lifeless in front of them. According to Lamar, the photo represents, “just taking a group of the homies who haven’t seen the world and putting them in these places that they haven’t necessarily seen, or only on TV and showing them something different other than the neighborhood and them being excited about it. That’s why they have them wild faces on there.”

It simultaneously presents a picture of the opposition behind us and the unity ahead, without discrediting either. The joy on their faces and the money in their hands could represent the opening of opportunities to grow and get what they deserve. 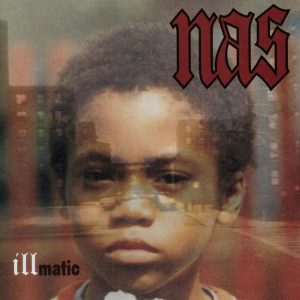 Illmatic is widely accredited to be one of the highest quality hip hop albums ever released. As a mere 20-year-old, Nas was only telling his story in the most expressive way he could. Luckily, he turned out to be an incredible storyteller and musician. While this album art might only be famous for the music it was attached to, the significance is still there. The combination of a young Nas’ face over the top of a Brooklyn street told you everything you needed to know about the album to understand its story. The impact of his childhood in Brooklyn influenced the rapper throughout his life, and the album cover stated it very simply and effectively.

In the “Great Performances” documentary, Nas shed a little light on the inspiration behind the art design. “I’m a big Michael Jackson fan,” Nas said. “I’ll tell you something I never said. On my album cover, you see me with the afro, that was kind of inspired by Michael Jackson – the little kid picture.” 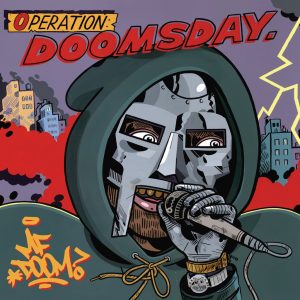 MF DOOM was a character in every sense of the word. His eclectic approach to watertight bars would gain him respect from listeners and artists alike. Doom’s approach to his music career was unique, choosing to appear only behind a mask when performing and showing up in public. In this way, he took his character- and his music- out of the box, and into imaginations.

Much like other album covers of his, Operation: Doomsday’s art was stylized like a comic book. The outlandish audio snippets and stories told through his raps certainly match up with the themes present in the art: a hero (or villain?) spitting into a mic while the world burns behind him. It’s quite fitting and serves to immerse the listener into this universe before he or she has even hit the play button. 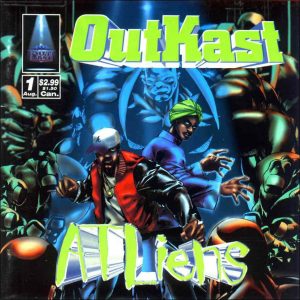 One of the most iconic album covers of all time is deservedly the art for one of the most iconic albums of all time! Much like the name ATLiens implies, this image finds both Big Boi and Andre 3000 together, looking as mystical as they should. Surrounding them are the incoming arms of the monsters they face. This cover pays homage to the storytelling of comic books, much like DOOM’s.

According to legend, due to the art style it was said that Big Boi’s face was unrecognizable. Instead of redrawing his features, they simply threw on a signature piece of his: an Atlanta Braves cap. While it may have been unintentional, this piece of Atlanta pride gave the cover art the duality it needed to hit home. It was romanticized and out of this world, a comic book adventure that furthered their image of being outsiders. Despite this, you could tell at a glance that they represented their roots. 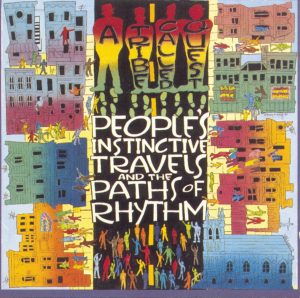 The album art for People’s Instinctive Travels and the Paths of Rhythm is sporadic yet familiar. A Tribe Called Quest was on a mission to make sure you knew that they weren’t like your everyday gangster rappers. The woozy shapes of people, footsteps and buildings bring you into the interwoven world of the legendary rap group. This was a fresh break away from the ignorance and pride of commercial rap,. The designs are symbolistic of all people and the diversity that makes our human race so unique.

Member Ali Shaheed Muhammad further elaborated that “LL Cool J, Big Daddy Kane, KRS-One, N.W.A, even Public Enemy, had a tough guy image. It was this bravado at the time that all the hip-hop artists had. People’s Instinctive Travels wasn’t any of that. We weren’t trying to be tough guys. It was about having fun, being lighthearted, being witty, being poetic. Just being good with one another. That’s what we presented. Just be. Just exist. Be comfortable in your own skin. People’s Instinctive Travels was about celebrating you, whoever you are.”

You can’t make a list like this without snubbing some deserving albums. Art touches everyone in different ways, which is what makes exploring albums and their accompanying art so enjoyable. For myself, the art on a good album gets stuck in my head as easily as the song does. Whether a cover uses heavy symbolism, different styles of drawing and painting, or simply gives another glimpse into the personality of a recording artist, it’s important and is attached to the music in one way or another.

Please let me know in the comments! What’s your favorite album cover art?