The Disturbing Rise of the Congressional Influencer

Members of Congress have more ways than ever to connect with the American public. Social media accounts of politicians on both sides of the aisle have gained popularity, or notoriety, and accumulated tens of millions of followers. Some might view this as greater transparency and accountability for their words and actions. But Is the congressional influencer really a good thing?

Hundreds of U.S. Congressional leaders in both the House and the Senate have leveraged social media more than ever before. Communicating their perspectives on important legislation is certainly welcome. The ability to get real-time updates from our lawmakers seems like it would help increase public understanding of issues but it seems the results have led to much confusion.

Many Congressional leaders have instead turned their job into a lifestyle not much different than your favorite Instagram influencer. Political theater is nothing new. However, the abdication of congressional responsibilities to stoke the flames on social media, and elevate their brands is something far more nefarious than a political show.

No tweet ever exemplified this as much as Marjorie Taylor Greene’s Tweet stating that she would debate Alexandria Ocasio-Cortez on the “New Green Deal” as soon as she was able to read ALL 14 PAGES!

I’m glad I ran into you today @AOC to plan our debate about the Green New Deal.

After I finish reading all 14 pages, like we agreed, I’ll schedule time for our debate.#MTGvsAOC pic.twitter.com/viuH5Uj0oD

Now, this is absolutely inexcusable. First, how does one criticize a document that they haven’t read? This is the obvious question. Second, it shows that Marjorie Taylor Greene is more concerned about her social media presence than actually doing her job. That is is unacceptable. All 14 pages, really?

Furthermore, Marjorie Taylor Greene has done a lot of heinous social media posting in her life. She has over 220,000 Twitter followers to which she communicated brain-dead statements. But what is most startling is that people who aren’t located in the 14th Congressional District of Georgia even GAF. Her job is to represent the people of that district. Perhaps they are all assholes and her actions check out. Most likely they are mostly normal Americans, and she is using her platform to pump herself up to land a talking-head job at OANN after she gets voted out.

We have also seen this kind of lunacy with alleged Chester-molester, Matt Gaetz. He is a Florida representative, who dabbles in underage girls, but is also into political theater and brand building. He recently went directly to Tucker “fuckstick” Carlson to defend himself against allegations of sex-trafficking minors. Maybe next time you should spend the time meeting with your lawyers instead. He will one day be tried in the court of law where the court of public opinion won’t save him

Other members of congress are equally despicable when it comes to brand building. Josh Hawley was the lone nay vote in a senate’s Anti-Asian Hate Crimes Bill. Is this what he thinks his constituents want? More hate in the world? No, he is simply trying to get noticed. Build his brand.

According to a study by Pew Research Institute, “Compared with a similar time period in 2016, the typical member of Congress now tweets nearly twice as often (81% more), has nearly three times as many followers and receives more than six times as many retweets on their average post.” Moreover, this action is coming from both sides of the aisle, “Democratic lawmakers post more content on Twitter, while the median Republican member now averages more audience engagement than the median Democrat across platforms.”

The Great Divide of Society

This study details that our political system has moved into the social arena and is probably there to stay. One of the most concerning things about this trend is the contribution of these civil servants to the buzzword echo chambers and the myopic approach to go viral. These bad actors don’t even stop to consider the long-term effect on the country and even sometimes themselves. They are just wolves chasing the dopamine hit from the next like or retweet.

What is most concerning is the group-think division of society. The lack of independent thought and forming one’s own opinion is destined to leave you sad and lonely. Fortunately, these congressional influencers on social media have provided the lemmings with talking points. It’s almost as if their DM’s are filled with collusion amongst the party to determine what is the right catchphrase to launch into the echo chamber abyss.

Not surprisingly the data from Pew Research supports that Democrat and Republican leaders increase social media engagement when they post about political opponents. This further creates the desire to divide the public through social media. 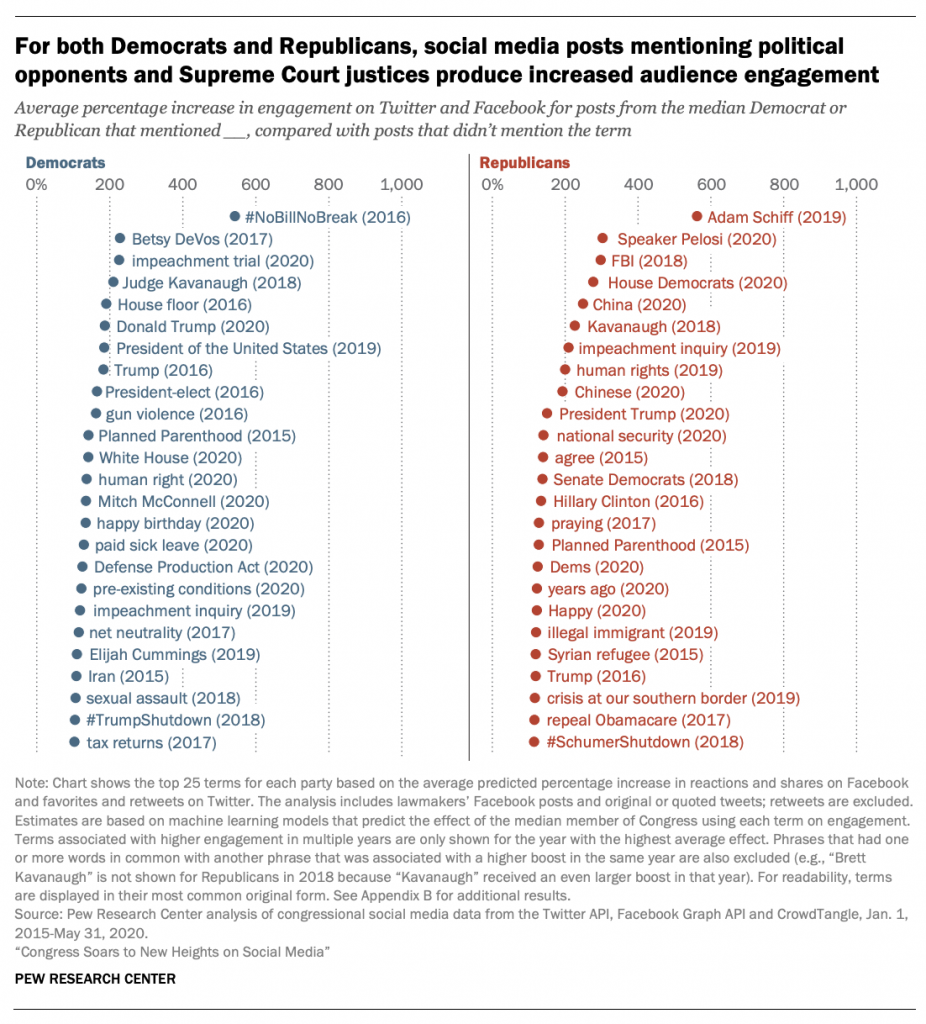 Congress and Social Media are a Toxic Combination

After surviving four years of the most narcissistic, self-aggrandizing, political leader in history it’s not surprising other political hacks are more concerned about their social presence than their people. Trump had over 80 million Twitter followers before Jack Dorsey realized the cost-benefit had flipped and removed 45 from the platform. But the truth is, what we have now might be worse.

Trump was always the elephant in the social media room. Many of his “followers” were following him so they could troll everything he said. Now, that he’s eliminated and what’s left is a bunch of desperados trying to fill the void by following in his footsteps. Of course, his footsteps are “remain above the law and only care about yourself”. Sadly, it’s an approach many social media influencers in congress are eager to adopt.