Not all years in hip-hop history are created equal. Some years are full of lackluster projects and tame headlines. Some are full of blockbuster albums and cultural changes. If you want an example of this, look no further than 1996. The first thing anyone notes about this year is the fateful death of Tupac, and later Biggie. East and West coast beef was at an all-time high, and the constant stream of gangster rap was causing some to step back and ponder whether this was the spirit of hip hop or just the popular image at the time. Some thought it might be a mix of both, like The Roots. Deciding to take this into their own hands with Illadelph Halflife. They released this landmark album 25 years ago, in the midst of the most infamous year in the music business. 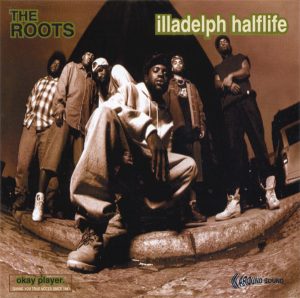 1996 was the year the nation as a whole got introduced to the famed group act. Their album single “Clones” gave the band their first Top 10 charted release. It was a stark contrast to the more relaxed, jazzy tone of previous albums Organix and Do You Want More?!!!??!. While The Roots had earned their record deal and a devoted fan base through these projects, the bold turn into the boom-bap and bars lane would prove invaluable to their success. Do You Want More?!!!??! was completely devoid of samples and pre-recorded material. This organic approach defined their sound, and despite the use of samples and programmed drums, The Roots personable sonics would be evident in every release going forward.

The Roots were a balanced band, consisting of a wide range of talents. Black Thought and Malik B commandeered the mics, as DJ and beatboxers Rahzel and Scratch contributed to the composition. The instrumentals often fell on drummer Questlove, Kamal Gray at the keyboard, and Leonard Hubbard on bass. Together, they retained their jazz and R&B influences while advancing their sound. The tracks are seamless combos of live recordings, samples, and DJ scratching. The rap on this project is slightly more serious, tackling issues such as personal responsibility, suffering, and injustice in society. Black Thought and Malik B twist rhyme schemes and lyrical content throughout conscious verses. This is one of those albums that will give you as much back as you put in.

An hour and 15 minutes is a lengthy album by most standards, yet The Roots manage to keep Illadelph Halflife gripping and entertaining. The number of individuals involved in the creation of the project undoubtedly helped it not become samey and bogged down by repetitive songs. On top of this, the features recruited by the band bring their own brand of quality to the mix. Common appears on UNIverse at War, adding his two cents on today’s attitudes:

“Some let the block block they mind, if they could see what I see.
Get out the city for a sec, be at the places I be.
Hey, I’mma be back on the deck,
Openin’ businesses in places, for you to cash yo’ cheque.” 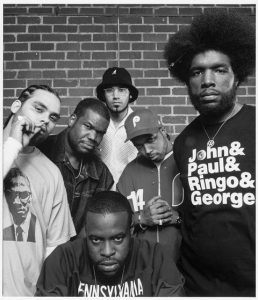 Other features include the legendary Q-Tip and D’Angelo, as well as the vocal skill brought by Raphael Saadiq. This group of like-minded musicians had a synergy that’s hard to find anywhere in the industry nowadays.

Illadelph Halflife is a full and complete project. With very few fillers, it’s engaging from start to finish. While we get plenty of rap like the barebones “No Great Pretender,” one of the most alluring parts of the album is the instrumental tracks. For example, the floating “What They Do,” or the face-off “? vs. Scratch.” You can’t downplay the absolute craftsmanship that oozes from a Roots record, and Halflife only cemented it further. The crisp mixing quality and timeless instrumentals still sound heaven-sent to this day, roughly 25 years later. The mastery of language and themes by Black Thought and Malik really came to fruition in the making of this memorable album.

Lots of people nowadays only know The Roots through their work done as the in-house band of Jimmy Fallon’s late-night show! While national television is always great exposure, they are well past the point of needing it. After blinding success by the members as a group and throughout their solo careers on the side, they can enjoy performing with the knowledge that they’ve given us gems like Illadelph Halflife, which will forever be known as one of the greatest albums to come out of 90’s hip hop.