How Robinhood helped Millennials to make profits from Pot Stocks?

Editor’s note: Recent market turmoil due to the spread of the Coronavirus has exposed investors to losses and volatility. Many young investors, who have never experienced a stock market crash, have been piling into stocks for years with the easily accessible investing app, Robinhood. These millennial stock pickers have shown particular interest in “pot stocks”, or cannabis companies – to be formal about it. While the growth potential exists, the uncertainty around marijuana investments will continue to cause volatility. The following article highlights some of the opportunities and risks facing millennial investors when it comes to pot stocks.

The accessibility of money management for apps like Mint and Quicken have introduced many a Millennial to the novel concept of saving money through the use of their smartphones, and a litany of other personal finance apps aim for young adults as promising and sleek programs that make managing and investing money a simpler task.

What are Pot Stocks?

The marijuana industry is made up of companies that either support or are engaged in the research, development, distribution, and sale of medical and recreational marijuana. Cannabis has begun to gain wider acceptance and has been legalized in a growing number of nations, states, and other jurisdictions for recreational, medicinal, and other uses. Some of the biggest companies in the marijuana industry include Canopy Growth Corp. (CGC), Cronos Group Inc. (CRON), and Tilray Inc. (TLRY). Many big marijuana companies have continued to post sizable net losses as they focus on investing in equipment to speed up revenue growth, which remains strong despite the economic disruption caused by the pandemic. 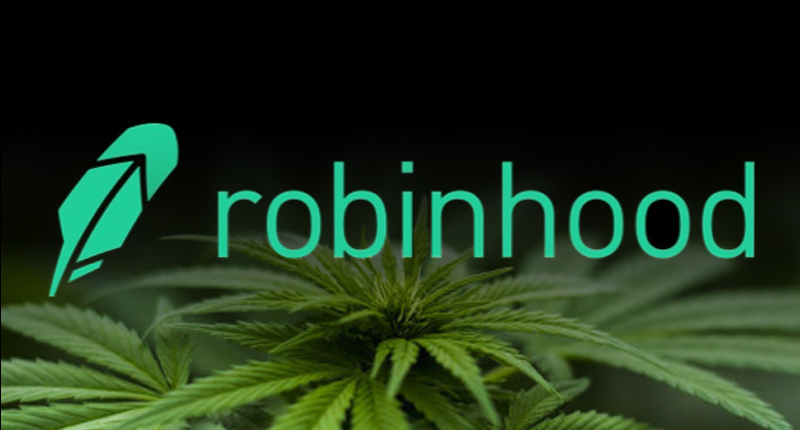 Robinhood is the hottest new venture particularly into making the stock market accessible for young adult consumers, and it’s been highly lucrative. In May 2018, the company raised $539 million in venture capital funding, and now its estimated worth is around $7 billion. They even recently announced an expansion into the United Kingdom. The app has been praised by journalists and consumers for its easy-to-use interface and lack of broker or commission fees. Along with increased access to stocks and cryptocurrency, Robinhood allows for Millennials to invest in publicly traded marijuana companies, often referred to as “Pot Stocks” across social media.

The cannabis industry is only growing as it gets more support from the voters and the state legislatures approve the use of either medicinal or adult recreational use marijuana, which ultimately makes the stock prices of marijuana companies skyrocket. The use of cannabis for medicinal and recreational purposes has been approved by several state legislatures this year, which include New Jersey, New York, Alabama, Virginia, and New Mexico. The earliest sales from these states should begin in 2022. There are now 36 states in America that have passed laws that allow the use of medicinal cannabis.

The cannabis industry has only moved forward since California became the first state to legalize medical pot in 1996. Medical cannabis is a type of therapy that is prescribed by healthcare doctors for health conditions and symptoms. This means that the patient has access to only cannabis treatments with Alzheimer’s, various different forms of cancer, several mental health conditions, multiple sclerosis, nausea, and pain. Medical users must obtain a recommendation from a medical provider and carry a medical marijuana card for access.

A portion of the most widely held stocks on the app are marijuana stocks, including Aurora Cannabis at No.1. At one point Aurora even managed to dethrone tech behemoth Apple as the leading stock on Robinhood; it also towered above General Motors, Ford Motors, and even Microsoft. A culmination of factors lead to cannabis stocks taking over the lists; their rather low investing points (often under $10 per stock) which appeal to Millennials who don’t have the funds to invest in shares with $1000+ price tags such as Amazon or Alphabet, and the potential growth due to marijuana legalization across several American states, which many experts have speculated will become nationwide in the next few years.

The growth in weed stock popularity is mirrored (and likely caused by) comparative rates of expansion by the recreational and medical marijuana industries. Colorado gained over $1 billion in revenue from medical cannabis sales in 2019; the first publicly traded marijuana company selling medicinal products, Medical Marijuana, Inc, reported profits of over $20.7 million in just the second quarter of 2019 alone. The legal market as a whole has been projected to reach and potentially surpass $66.3 billion by 2025. But while success may loom on the horizon, the current stock market trends for weed stocks are not reflective of this yet. Aurora Cannabis has hit a 52-week low on the market, and investors are growing wary. Given that cannabis has still not been fully recognized as safe by the FDA and thus has not been given the green light for wider distribution just yet, this could certainly impact companies like Aurora. The volatility of these up-and-coming companies can also be explained by the fact that they’re still growing; it may take several years for a business to become more established, stable and profitable once it gets past certain infrastructural renovations and self investments. For now, cannabis companies will need to raise capital and cash in order to sustain operations until they are profitable, or at least cash flow positive.

As legalization creeps into the probable inevitability of becoming nationwide, Robinhood will likely remain king for Millennial marijuana investments. Aurora Cannabis, Cronos Group, and Canopy Growth are all projected to expand their businesses going into 2020; and time will tell who the winners will be in the highly competitive cannabis industry.

Interested in more weed-related posts? We got you covered.

Thanks for reading! Like what you’re seeing? Subscribe to our newsletter and follow Loud News Net on Facebook and Instagram for dope updates. Keep it locked on LoudNewsNet.com, and check back often as we continue to grow our Loud Originals section while keeping you updated on the latest curated cannabis news. Feel free to leave us comments and let us know what you want us to cover! Until next time, keep it loud!