New To Netflix: ‘The Harder They Fall’ Review

I haven’t really been watching many movies, shows or keeping up with Netflix as much as I usually do. With so much bullshit going on in life right now, I just haven’t been able to sit and get into a good movie. And it’s a shame because puffing some good herbals and getting lost in a film is easily one of my favorite past times. So today, I finally got a few hours to myself and without thinking too much about what to watch, I fell upon Netflix’s latest original The Harder They Fall, and I have to say – it is easily one of the best films I’ve seen in a long time.

What I wanted and needed was something that would truly engage me, sucking me into an imagined world full of adventure and memorable characters, so much so that I completely forget whatever woes my real life is haunting me with. The Harder They Fall did this and then some, and I couldn’t recommend this movie more to fans of action and adventure movies.

So what exactly makes this movie so damn good? Where do I even begin? There is so much that makes it absolutely worth the watch; even with a 2+ hour runtime, my millennial stunted sense of time and short attention span could even handle it without complaining about it being too long or scrolling through my phone as it plays. I suggest you get nice and baked because we’ve got a lot to cover.

Synopsis of ‘The Harder They Fall’

At its core, The Harder They Fall is a classic revenge tale. The film opens with our hero, Nat Love (played by Jonathan Majors), at the age of 10 witnessing his parents’ murder by the ruthless outlaw Rufus Buck (played by Idris Elba). Before leaving, Buck etches a cross into the forehead of the child for reasons you’ll find out later.

Nat grows up to become an outlaw, but more similar to a Robin Hood-type hero. While his brooding demeanor and seeming disregard for taking a human life would make you think he’s following Buck’s path, but we come to find out that he is actually full of compassion and honor. But nonetheless, he’s still a wanted criminal, and trouble always has a way of finding him. 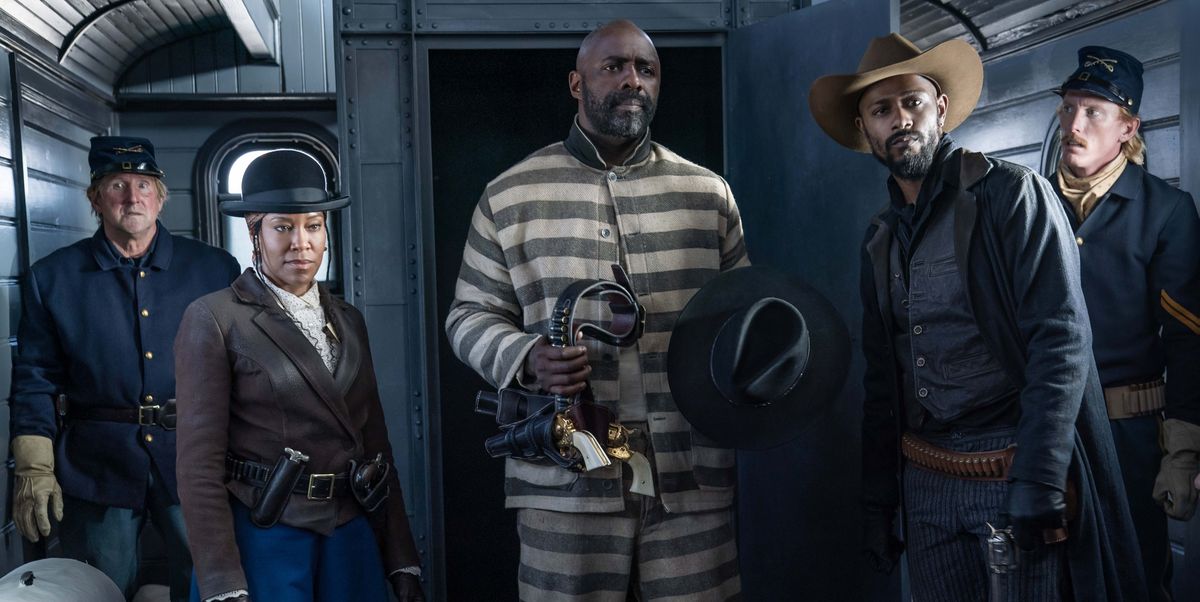 Buck, on the other hand, found himself locked away in prison, much to the relief of just about everyone, except his own gang who somehow gets him pardoned. Buck has big plans now that he’s out, but once word gets to Nate and his gang of fun misfits, they set out to help Nat get revenge and put an end to Buck’s reign of terror.

I have a feeling that many people will compare this film to ‘Django Unchained’ and other works by Quentin Tarantino. While there are definitely similarities in style, such as quick and witty dialogue and shameless use of violence, director Jeymes Samuel has created something truly his own. Using the stories of real-life black cowboys (and girls) as the framework for his imagined story, accompanied with a hip-hop and rasta soundtrack and starring many of the best black actors working today, I felt as though I was witnessing something epic that I had never seen before.

Some might read about a black cowboy movie being released today and think that it has some sort of agenda to push, but The Harder They Fall transcends all of that and just manages to be a fun watch. It never takes itself too seriously and doesn’t push any kind of ideas about race or racism. It’s also worth noting that Samuel chose not to use the N-word in his dialogue, which he explains here in this interview with Essence:

“We ain’t no nincompoop.” Let the record reflect. Just because it’s a period piece stop calling us n-ggas. It doesn’t give you license to call us n-ggas 100 times. Just because the story takes place in the 1800s shouldn’t give you license to make women subservient. When Nat Love says to Trudy Smith, “Where’s your boss?” She goes, “Boss?” When Nat Love says to Stagecoach Mary, “What in my character makes you think I’d allow that?” She goes, “I wasn’t asking for your permission.” Ain’t no subservience in this movie. We’re kings and queens on horseback.

What disappointed me about movies like Antebellum and the recent Candyman remake is that they felt like they had a social message to push, and it felt incredibly forced throughout both movies. But films like Get Out and Sorry to Bother You took whatever social commentary it was trying to make and played with it; it made it campy and fun, and presented a creative plot that allowed viewers to come to their own conclusions about what it might mean to refer to. The Harder They Fall does that same thing – while there is something very strongly afro-centric about it, it’s something you just feel as opposed to being spoon-fed. But above everything, it just succeeds in being a dope ass action film.

Jeymes Samuel Is a Name to Remember 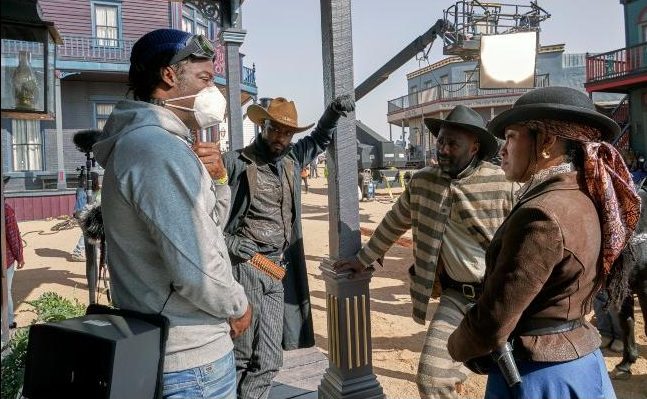 Before seeing this movie, I was unfamiliar with the director Jeymes Samuel, but The Harder They Fall has left such an impression on me that I won’t soon forget the name. He has an obvious reverence for good filmmaking and storytelling, and this film shows so much promise being his second movie. I love his writing and directing style, which can be very campy and ridiculous but always engaging and fun to experience. I just can’t stress enough how much I enjoyed watching this movie. It reminded me of the first time I saw a movie like Pulp Fiction or Kill Bill for the very first time – I felt like I was experiencing something really cool and different, and I felt immersed in this world and the characters in it.

I also have to mention the dope soundtrack again, for which Samuel composed the score and produced the music. This shouldn’t be much of a surprise considering Samuel is already an established musician under the name The Bullits, and also (fun fact!:) he’s Seal’s brother. He managed to pull together some big names in black music on the soundtrack, like Jay-Z, Kid Cudi, and Lauryn Hill just to name a few. Even if you don’t end up watching the movie, the soundtrack alone is worth a good listen.

I may be a bit biased here, but I loved this movie. I recognize that it’s not for everyone, but for me, it was everything I love. The acting and cast were outstanding, and they had such good chemistry that it felt like they had as much fun filming it as I did watching it. From beginning to end the movie is full of laughs and in-your-face action that never lets up; it’s sure to keep you on the edge of your seat. I also really love the fact that Samuel managed to make me like a genre that I’m not typically into, especially as an African-American. He managed to implement the idea of representation into his film in a very creative way that doesn’t feel forced, but still makes me feel proud to be black.

I definitely recommend rolling one up and giving this one a go. I personally watched it alone but I think it would be a lot of fun with friends. If you like over-the-top action and adventure movies, with endless laughs and shameless levels of violence and bloodshed, then this one is for you.