Loud News Net recently caught up with legendary photographer and director, Estevan Oriol. He is the director of the documentary ‘LA Originals’ now streaming on Netflix. The film displays Oriol’s vast hip hop and Los Angeles street culture visual archive spanning nearly 30 years. In the interview we discussed the genesis of the documentary, modern “photography”, bringing street art to gallery life, photographing Taliban prisoners in Afghanistan, and much more.

His photography has captured a wide range of subjects including Eminem, 50 Cent, Robert De Niro, the Skid Row community, lowriders, L.A. gangsters, and Kim Kardashian. He has directed music videos for the likes of Everlast, Cypress Hill, and Blink 182. 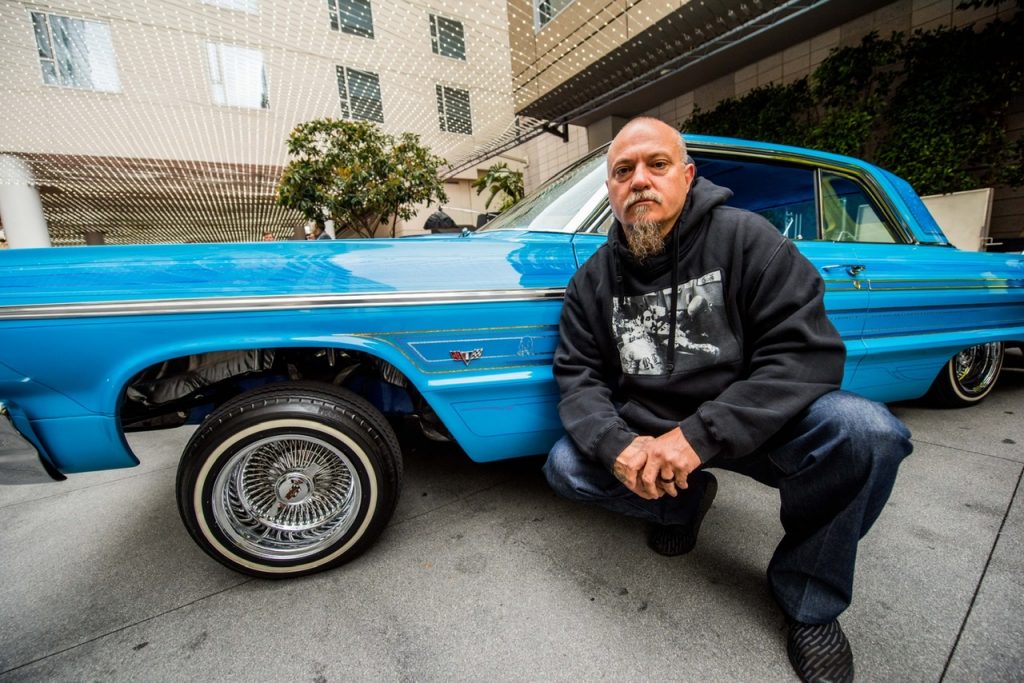 Estevan Oriol is an influencer. No, not the Instagram influencer “going live” that you just thought of. But the kind of influencer who’s impact has shaped cultures globally. His photography of Cortez rocking, lowriding L.A. street culture has been viewed by millions across the world. From Japan and Brazil, the L.A. culture Oriol exported through his camera lens is easily found. With the LA Originals documentary out on Netflix, it might be easy to rest in his directorial success. But that’s not Estevan. He is from the old school, and learned how to be an expert photographer the hard way — on film.

“EVERYBODY CAN BE A PHOTOGRAPHER ON THEIR PHONE OR DIGITAL CAMERA, BUT YOU’RE A HOBBYIST. YOU’RE NOT A PROFESSIONAL PHOTOGRAPHER UNTIL YOU CAN PAY YOUR BILLS.”

With photography gone wild on social media platforms like Instagram, Estevan realized he needed to elevate his already established game. “It’s completely watered down. Completely oversaturated. Everything’s been shown. Every rock’s been overturned. But for the good guys, it made us all step it up a notch. All this bullshit out here made me rethink my shit and be like ‘You know what?’ I need to step my game up.”

“Too many motherfuckers out here doing mediocre bullshit. So I got to really, really, really stand out if I want to keep doing this as a profession”, Oriol explains. “Everybody can be a photographer on their phone or digital camera, but you’re a hobbyist. You’re not a professional photographer until you can pay your bills.”

It’s easy to forget how much the world of photography has changed in 25 years. When Oriol began in the 1990’s, he learned to take photographs on his father’s camera. This old school training prepared him to relentlessly stay on point into 2020. “I had to. I was paying for that shit. When you’re shooting film, you’re paying for every single picture.”

It was a long time coming to get the LA Originals documentary released on Netflix. Despite some false starts, perseverance eventually led to an encounter of kismet with Sebastián Ortega. Fast forward a couple years and a pandemic later, and the film reached #5 on Netflix worldwide in April.

So what was the journey to get ‘LA Originals’ all the way to Netflix?

Estevan Oriol: I started filming in the mid-90’s, just filming everything out and around as far as like hip hop and LA street culture. And around the early 2000’s I decided that we are going to make a documentary and we’re going to call it ‘Ink’. We approached a couple people. One of them was Chris Mills, a former NBA player. The second one was Lawrence Bender, the producer of Quentin Tarantino. And the third was Ron Meyer, the head of Universal, and Brian Grazer. Chris Mills wanted to do a documentary. Lawrence Bender wanted to do the doc. And then Brian Grazer, Ron Meyer wanted to do a full feature movie, so we signed with them. But that puts the documentary on the shelf. Because of a non-compete type of thing. So the documentary was shelved until the movie came out. They did the movie. We got seven years of re-writes and then that movie got turned down. And they started another movie, which was called ‘Lowriders’. And that took another three years, and we put that movie out. We executive produced and consulted on it. And then once that movie came out, the documentary rights and footage got freed up.

We got the rights back in 2017 and I met a guy named Sebastián Ortega, who was the only lowrider in Argentina and he’s like a lowrider at heart. He wears, Chuck Taylors, Dickies and white t-shirts until work, then he’s a film exec. You know, he’s a lowrider also. So we’re like, this is the perfect fit for us. Somebody that gets the culture. He owns a lowrider. And he’s been watching our work for over 15 years and he was like, “Hey, man, whatever happened to ‘Ink’? How can we put that out?” I said, “Well funny you should ask because I just got the rights back to the footage” and he goes, “Okay, can I do it?” I was like hell yea!

So I went to Argentina. He cut us a check to start getting the footage transferred. And then he had a deal with Netflix already in Argentina. And once we started getting the film in good shape he walked it over to Netflix. They said “we’ll take it”. So it got released out of Netflix Argentina. Then Netflix worldwide picked it up.

With all their history, what did Estevan want the documentary to show the world?

Estevan Oriol: We’re ahead of our time with a lot of different stuff we were doing and we weren’t getting recognized for things that we were doing. They were approaching us to do reality shows, but we turned them down because we thought reality shows were corny. We wanted to do the documentary because we thought documentaries were taken more serious in the film industry and that’s where I wanted my career to go after doing photos. I’ve already directed videos, commercials and web content. My next step is into the film world but I wanted it to be a little more from a serious space than if I was in a goofy reality show. But I wanted the world to see us — we have good times and everything — but we’re serious artists. We wanted to be taken seriously basically, for all of the world to see.

The success of ‘LA Originals’ documentary on Netflix has been “One thousand times more than I ever thought it could be” says Oriol. “I mean, you hope it to be that much, but you never really know it until it happened”. His DM’s have been flooded with thousands of messages from friends and followers alike since the documentary dropped in April. His people were sending him screenshot evidence of the meteoric rise up the Netflix charts. “Then it went to number five three days into it. I was like — Oh shit, it’s OFFICIAL!”

“WE WANT TO DO COOL SHIT TOO, LIKE ALL THE BOUGIE PEOPLE. HAVE ART SHOWS, HAVE SOME WINE AND CHEESE AND CRACKERS, AND GO TALK ABOUT HOW EVERYTHING IS SO GREAT. AT FIRST PEOPLE WERE LIKE “HA! YOU AIN’T ON THAT LEVEL YET, GET THE FUCK OUT OF HERE!”

His photography career began back in the 1990’s when he was road manager for House of Pain and Cypress Hill. “Soul Assassins since day 1”, Estevan states. However since that time, he has taken his career from the underground of L.A. hip hop street culture to the mainstream of gallery art.

Estevan Oriol: Our first art show was in Tokyo in 1997. In a gallery in a place called Harajuku. Our second one was in L.A. at a place called George’s gallery that was owned by the Beastie Boys in East Hollywood. So, we had been doing it for about five years, I’d say. Cartoon had been drawing for a long time, but we’d been in the industry for about five years before we did our first art show. Back then, people weren’t doing that — People who were doing street art like Cartoon weren’t really going for gallery shows. They didn’t really give a fuck about that, you know? They’re like street art is about the street. It wasn’t about going into an art gallery — and the same with people like me; like the type of photos I was doing.

Nobody gave a fuck about them in an art gallery. They’re like, “For what? What do you want? An art show? For what?” You know we’re like, well — to show people our thing. We want to do cool shit too, like all the bougie people. Have art shows, and have some wine and cheese and crackers. Go talk about how everything is so great. At first people were like “HA! You ain’t on that level yet, get the fuck out of here!” When we went to Japan, then we played that card.

Now we’re fucking international. We’ve been doing this shit overseas. They’re like, “Oh, yeah, okay, well cool!”. We had an angle and like that, we’re internationally known, but really — we had one art show at one place called Harajuku in Tokyo, and you know, we’re lucky to do that. We had a good little turnout; it wasn’t the biggest spot, but it was good to get our feet wet. And for the fact to say that our first art show was in Japan.

“I’M A PEOPLE PERSON. I GOT TO BE SHOOTING PEOPLE. I GOT to BE OUT IN THE STREET WORKING WITH PEOPLE”

Transcending Estevan Oriol’s work is a thread of the human element. He even captured the humanity of Taliban prisoners in Afghanistan in 2013, “I took a couple shots and I thought you know, people are gonna be throwing piss or shit at me or spitting on me. But the guys walked up”, he recalls. “They’re smiling, posing and shit”.

Estevan’s approach to finding the next subject is to simply  “go with the flow” and “wing it” and see what happens. Despite high demand for professional shoots, Estevan still finds countless photos by roaming the city and being among the people. Which is problematic with shut-down orders persisting across the country. “Me, I’m a people person. I gotta be shooting people. I got to be out in the street working with people. I like going places where there’s people.”

Oriol’s people person attitude goes well beyond his photography career. He regularly supports organizations that care for the homeless, ill children and disabled veterans. These days his charitable support has been towards the SABOT Foundation and the local Children’s Hospital.

So what is next for the L.A. Original, Estevan Oriol?

Estevan has many plans once he is able to “get the fuck out of quarantine”.

Estevan Oriol: I want to do a couple more documentaries and then just slide right into doing some features. I’m not looking to do the next Batman movie or anything like that, but I would like to do some good, you know, movies that go along with the type of photography that I do. The kind of stories I tell in my photos. And of course I’ll keep pumping out some books. My next book is Lowriding, L.A. Woman 2, and Hip Hop. I got those books coming. Then I got a couple of documentaries coming. I’m just gonna go with that for now until somebody throws me a good budget so I can make a real movie.

The world may have changed in 2020, but Estevan Oriol’s work ethic remains consistent. As his many photograph subjects are “striving to be the best at what they are”, the man behind the camera continues to do the same.

More of Estevan Oriol’s work can be found at www.estevanoriol.com

Loud News Net is an independent news and entertainment organization. We did not receive compensation for this article. Word is bond. Article originally published on May 12, 2020.