You don’t have to go all the way to the circus to watch a freakshow — just turn on the tv and take a look at the Met Gala 2021.

Besides the thought-provoking Balenciaga ensemble that covered every inch of Kim K’s body (no Kanye West in sight though!), there was an even bigger shocker — Rep. Alexandra Ocasio-Cortez’s white Brother Vellies designer gown with a bold red message: “Tax the Rich”. 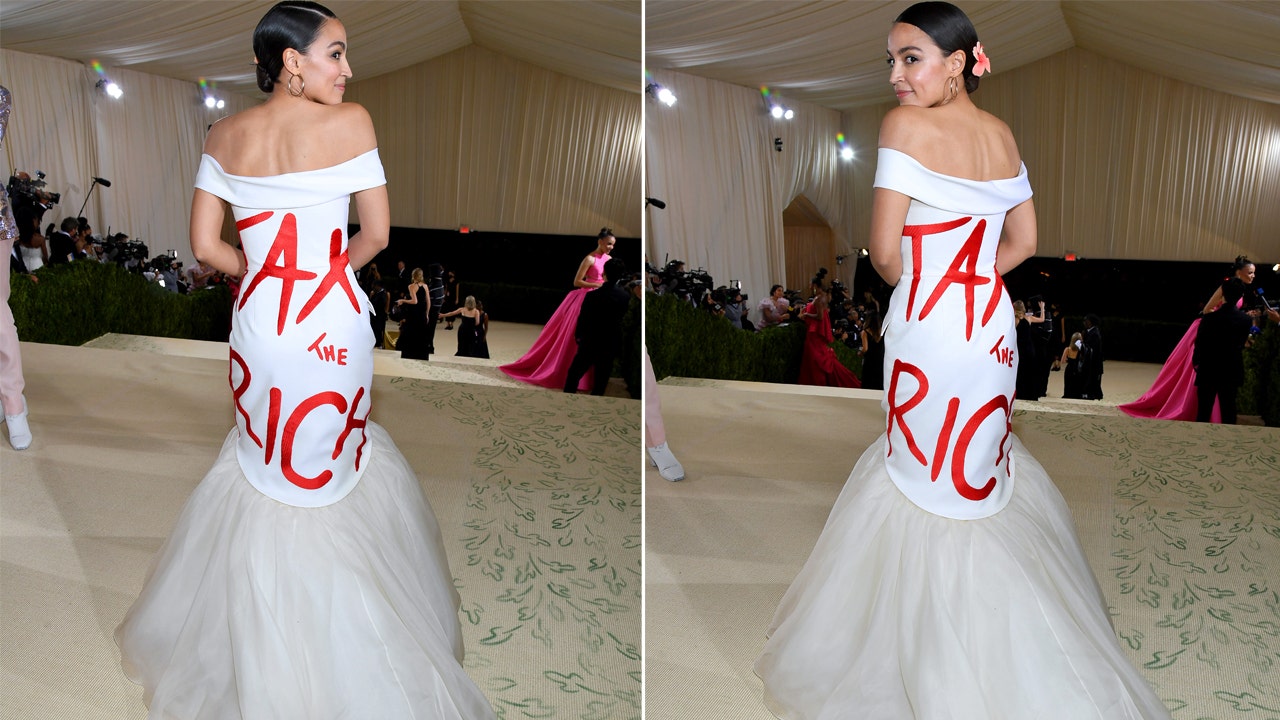 Before jumping into my own thoughts, here’s what AOC had to say about why she decided to send this message to Americans during one of the biggest events featuring Hollywood’s wealthiest stars.

Democratic Congresswoman AOC was accompanied by Aurora James, the creative director of Brother Vellies, famous for launching a campaign called the “15% Pledge”. The campaign fired up on Instagram calls on corporations and retailers to devote 15% of their consumer spending power to Black-owned businesses.

Now that’s all fine and cool, and I love that Black-owned businesses are getting increasing attention on social media. However, one can wonder, wasn’t it hypocritical of AOC to wear that provocative gown at an event where she was clearly one of the filthy rich?

What Critics Said About the Met Gala 2021 Statement

Even the chief fashion critic at the NY Times, Vanessa Friedman, claimed on her Twitter profile that the “Tax the Rich” gown raises a few questions.

Alexandria Ocasio-Cortez attending the $35,000-a-ticket #MetGala in a Brother Vellies gown blaring “Tax the Rich” is a complicated proposition. pic.twitter.com/prxOojWxwx

To all the people claiming AOC got a “free” ticket to the #MetGala — just because she did not pay for it does not means it is “free.” Someone paid 35K for her to attend. Just seems she might have wanted that money used for something other than an elite party ticket.

Anna Navarro-Cárdenas, political commentator made an even better remark:

Not an @aoc hater.
But come on, going to an event for super-rich with “tax the rich” written on your ass, won’t change a thing. It’s a stunt to justify her presence at an fancy shin-dig that doesn’t match her political persona.
She still looks better that Kim K in the bat outfit. pic.twitter.com/g4vi9Di53l

My first thought when I saw AOC in that dress was “wow, that’s intense attention-seeking right there”. I mean, AOC and the designer definitely achieved their goal, the dress is one of the most talked-about from the Met Gala 2021 event. And what do you think the purpose of the dress was? Well, of course, to have it posted all over social media. Hell, it even made it to LoudNewsNet.

Other Bold Statements from the Met Gala 2021

AOC’s strong statement wasn’t the only one of its kind during the annual event. For example, American soccer player, Megan Rapinoe, showed up in a star-spangled suit with an eye-catching “In Gay We Trust” clutch bag.

Moreover, there’s fellow Congresswoman Carolyn B. Maloney, who turned heads in an “Equal Rights for Women” gown. Speaking about Maloney’s, she once wore a burqa in the House of Representatives to make a statement about the Afghanistan invasion. 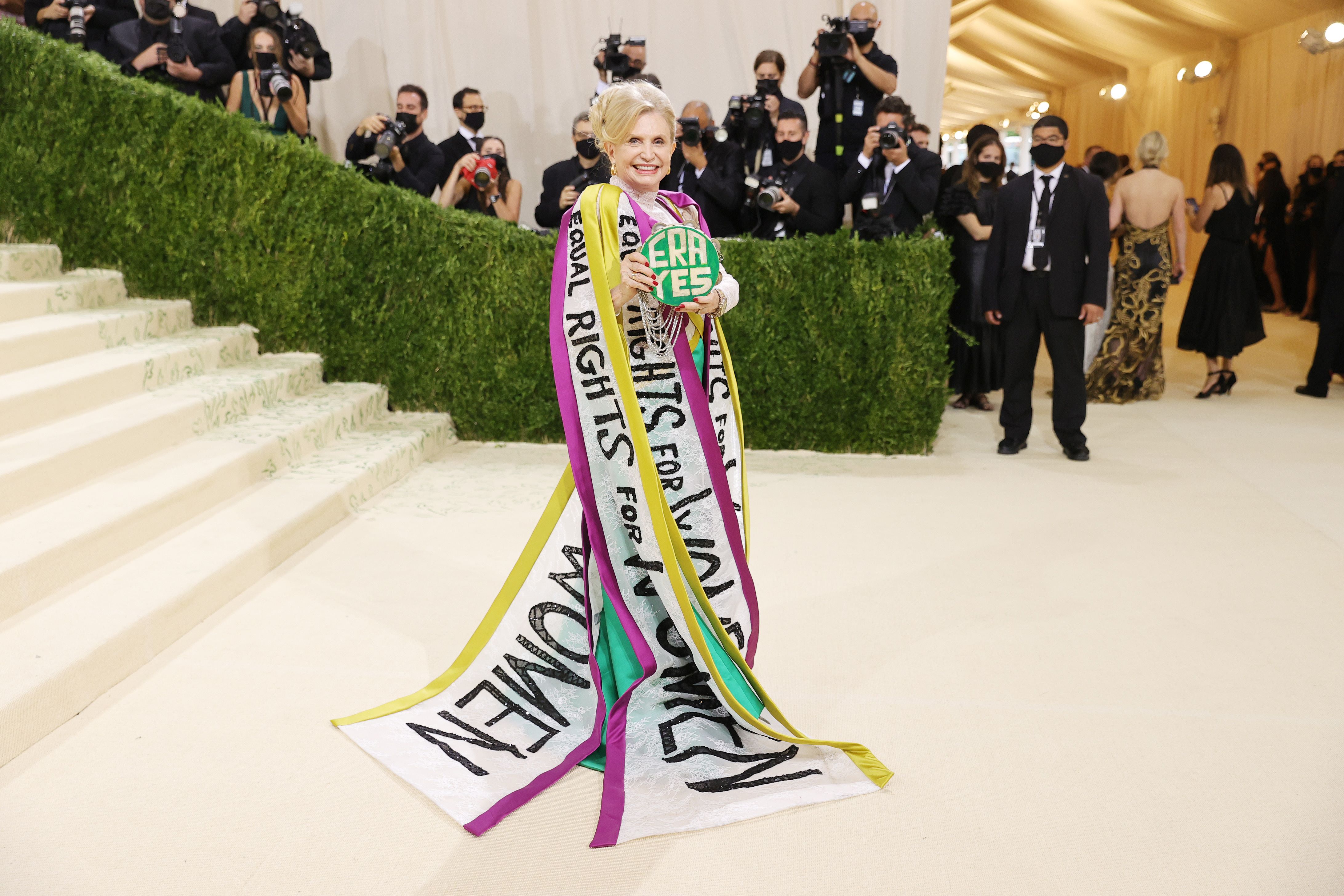 Unfortunately, that stunt also received significant backlash, especially from activist Rana Abdelhamid who claimed that the politicians’ speech contributed to a negative narrative about Muslim women.

I get it, I get it. The “Tax the Rich” message needs to be put out there. However, AOC might have given the affluent a favor by wearing the provocative dress to a lavish event where tables cost up to a mind-blowing $300,000.

Final Thoughts on the Met Gala 2021

Overall, many looks on the Met Gala 2021 carpet made headlines, some crazier than others. For example, Billie Eilish channeled Marilyn Monroe in an Oscar de la Renta dress, while singer Kim Petras showed up with a horse head strapped on her torso (don’t be alarmed, it was definitely fake).

Sure, AOC’s dress was out there, and that was the point of the whole thing. She managed to attract the attention she wanted, and the message got the coverage it was seeking. However, I’m not sure whether the Met Gala 2021 was the right place for the bold political statement.